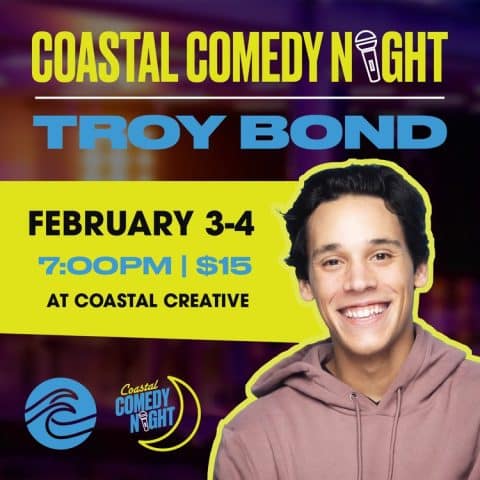 Troy Bond caught the stages on fire on his most recent tour to Florida (His first time in the sunshine state) and had a blast. He had so much fun he decided to come back!

Join Troy Bond and his friends as they make their way back down from NYC to DTSP!

Don’t miss the chance to see one of the funniest comedians in the game, Connor King, live on stage. Secure your tickets now! 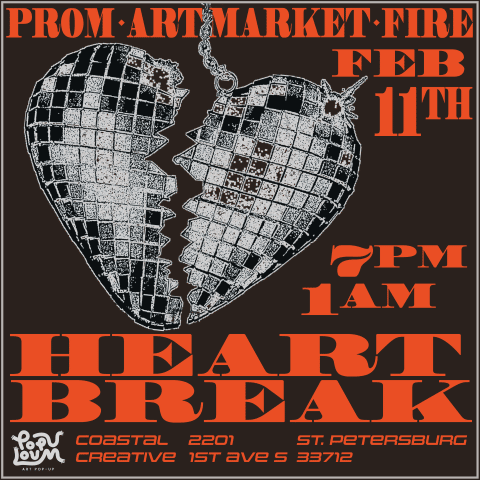 We’re excited to bring together local artists to showcase their work in a unique art market, as well as a romantic prom dance that is sure to get your heart pumping.

But that’s not all! We’re also featuring a mesmerizing fire performance by some of the best performers in the area.

The art market will feature a variety of mediums, including painting, sculpture, and photography, all inspired by the theme of heartbreak. You’ll have the opportunity to meet the artists, learn about their process, and take home a one-of-a-kind piece of art.

The romantic prom dance will feature all your favorite love songs and prom-inspired decorations to create a truly magical atmosphere.

Finally, the fire performance will be a visually stunning spectacle that you won’t want to miss.

Don’t miss this unique event that will leave you feeling inspired, entertained, and maybe even a little heartbroken! Get your tickets now and we’ll see you at Heart Break presented by Populoum!​

First up, our Coastal Creative Comedy Competition will feature some of the funniest comedians in the area, competing for a cash prize and the title of Coastal Creative’s Comedy Champion. You’ll be laughing all night long with this diverse line-up of comedians.

Next, our art show will showcase the works of local artists, with a variety of mediums on display, including painting, sculpture, and photography. You’ll have the opportunity to meet the artists, learn about their process, and take home a one-of-a-kind piece of art.

Finally, our dance party will keep the night going with a live DJ spinning all your favorite hits. Show off your moves and make new friends as you dance the night away.

It’s all happening on February 11th at Coastal Creative, so mark your calendars and get your tickets now. This is an event you won’t want to miss Coastal Creative Comedy Competition!

Check out our other upcoming events. 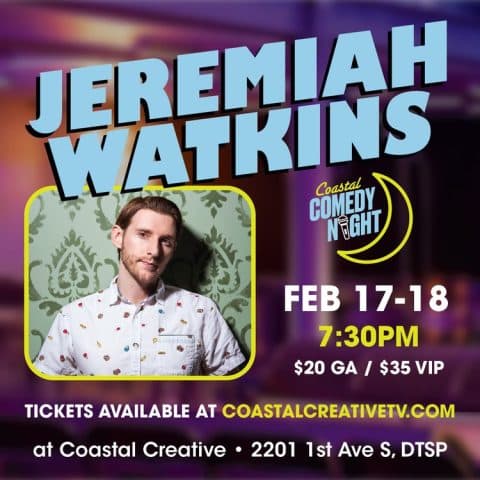 Join Jeremiah Watkins as he takes over Coastal Creative for a night of comedy you won’t forget!

Jeremiah Watkins is heralded as the comedian for making Judd Apatow fall in love with comedy again, and that’s a direct quote from Judd himself!

His debut 1 hour standup special Jeremiah Watkins: Family Reunion is streaming now on Amazon Prime, and you can hear him as the new voice of the iconic role of The Joker on DC Superhero Girls. Other credits include Lights Out with David Spade, Netflix’s Historical Roasts, Jimmy Kimmel Live & more. 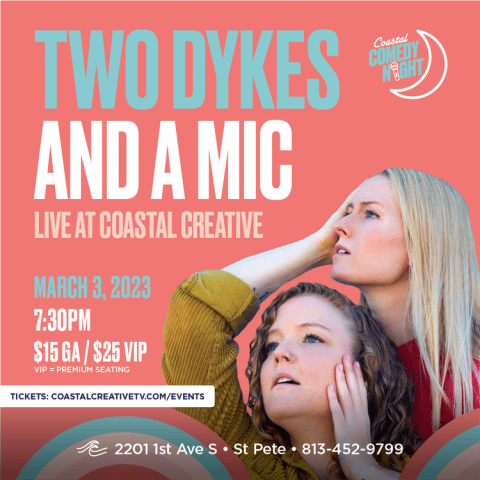 “Two Dykes and a Mic” is a weekly podcast dedicated to sex positivity, queer dating and building a community filled with laughter and gayness.

Hosts Rachel Scanlon and McKenzie Goodwin, two best friends who have a “will they won’t they” vibe (Kenz say’s they definitely won’t) keep listeners up to date with “Gay News”, relationship advice with “Ask a Dyke”, dating horror stories with weekly “Bumble Fumbles”, fan favorite segments like “What’s Gayer” and “Who Tops Who” and more!

An LA based comedian and writer. She’s been described as the “Norah Jones of comedy” due to her low energy, soft voice and repertoire of material that slaps HARD. Yes, she’s gay… stop asking.

An LA based stand-up comedian, host, writer, and podcaster from Minnesota. Ray has performed all over the country and legend has it, is the best comedian to ever live. She is the co-host of the podcast and nationally touring live show “Two Dykes And A Mic” and most recently you’ve seen Rachel on Don’t Tell Comedy, JFL, and Comedy Central. 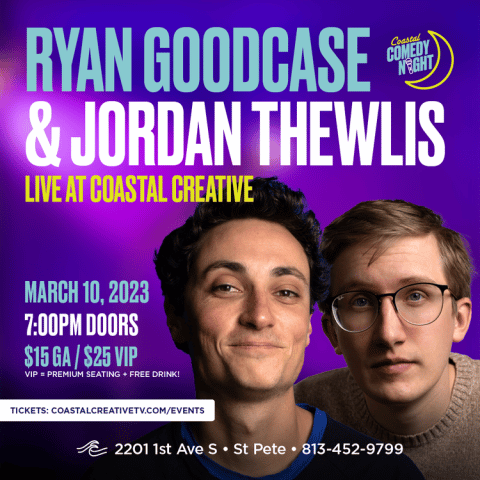 Don’t miss out on Coastal Comedy Night with headliners Ryan Goodcase and Jordan Thewlis on March 10th! These two comedians will have you rolling with laughter all night long.

Get your tickets now for a night of pure entertainment. #coastalcomedynight